Let’s see, which galleries did we visit? – They are too many to list them all here. So if you are reading this and know that I read your blog, I probably saw your gallery. Just a few thoughts that occured to me while looking at all those pictures:

Susan has wonderful pictures as always. When I grow up, I want to be able to take pictures as well as she does.

I was impressed by the photo of her office – Susan, I really do hope you will finish this book real soon, get rid of all the stuff and finally enjoy your sabbatical!

John Marden‘s pictures were interesting because he’s one of the few who never had a picture of themselves on their weblog.

I was also curious to see the photos of the Iowa Homesteaders, and I was surprised by the first picture, or rather the name of his daughter Kyra. I have a friend named Kyra (which is pronounced “Küra” in German), and to this day she was the only person with that name I knew. I’ve never seen or heard of anyone else by that name.

And of course I didn’t know that Gerrit VanDyk is my youngest reader!

I also had to look at the pictures of the other Germans (Frauke, Scott and Christopher, Martin Spernau, Der Schockwellenreiter, Arf, Yam). Among them were the first pictures of Raphael Spernau, two-weeks-old son of Martin Traumwind Spernau.

I also liked Jan-Willem Swane‘s pictures from the Netherlands and Kristina Anderson‘s and Jonas Beckman‘s from Sweden. I noticed quite a few differences between homes in Europe and the USA, I think. It’s difficult to tell what it is exactly (apart from the fact that most Americans have a huge fridge with lots of stuff taped to it).

And as always, it was nice to look at pictures from San Francisco and other nice places in the world. Just looking at them made me want to travel again. Many pictures reminded me of our trip to the USA…

What a difference within just one week: Yesterday we looked at the Saenz family’s BTC pictures, which looked like it was still sommer over there, and today Rick has pictures of snow! Unbelievable. 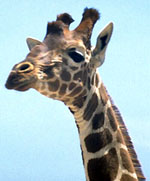 Al and his family went to the zoo yesterday. He’s got lots of animal pictures! I especially liked the one of the reticulated giraffe.

Giraffes are beautiful animals who move very gracefully. And they have large eyes with long lashes.
On the right is a giraffe I met in Kenya. It was not shy, but very curious about those people that came for a visit and poked their cameras at it.

By the way, Al, it’s good to hear your face is not burnt too badly. Get well soon!

Apart from the biiig present I was finally allowed to open yesterday (all those galleries), I got a present from NetDyslexia: a Greek sunset. Dankeschön!

The weather today is much better than it was last week on Sunday and Monday, when we shot the pictures for Behind the Curtain.