Peace in the Middle East?

Al wonders why peace seems to be impossible to achieve in the Middle East. So do I. There have been fights as long as I can think, and whenever it finally seems like an agreement was just around the corner, someone breaks the armistice again.

During my trip to Kenya a few years ago, I went on a one-week safari. In our minibus were students from (almost) all over the world, among them a couple from Israel. They were about the same age as I, but both had served in the army for two years. For me, it was – and still is – hard to imagine that I would have had to serve the army for two years and learned how to handle a machine gun if I had been born in Israel instead of Germany…

Normally, it all seems to be so far away and almost unreal, but you start to think about it in a different way when you actually meet people who live there and to whom these fights are an immediate danger.

I hope my dear readers are not bored with yet another sunset… It was just so beautiful today!

The first photo was taken from André’s office’s window, the second from a field nearby. 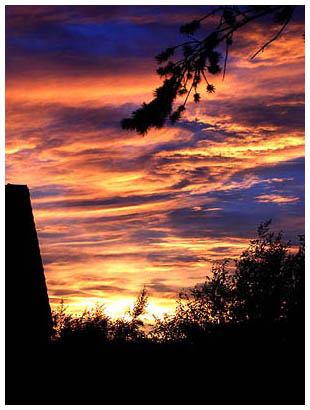 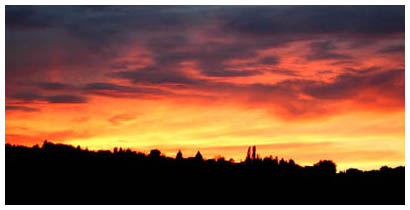 Rick Saenz has photos of his daughter baking muffins on Downstairs at Dry Creek. They make me hungry!

Rick, were you thinking of our food conversation when posting the pictures? (I said I love muffins, but few bakeries in Germany have them…)

I’ve been thinking of buying a muffin baking form for months! The problem is, I don’t have much time for baking, and we don’t have a deep freezer. And if I get to bake something, it would be nice to be able to bake a lot of muffins at once, freeze some of them and eat them later…

Here’s a little collection of links to muffin recipes…