Sunset the other way round 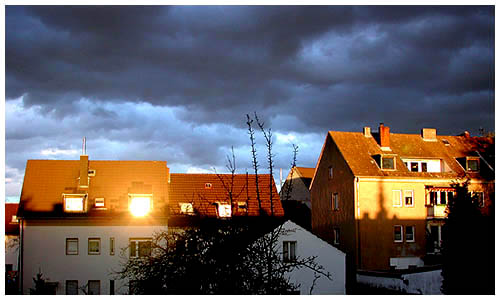 Thanks for the comment on my photo, Susan! These words from an excellent photographer like yourself… I’m honored.

Somehow, this reminds me of another weblogger who went ice-skating with his son…

A different way to search the net

map.net: “The entire Internet is now on a map of Antarctica.” You can click on any of the categories and get to a new page which shows undercategories and sites that fit in the general category. Cool!

Just to be the man who walked a thousand miles

To fall down at your door”

It was in the soundtrack of Benny & Joon in 1993 and was a hit five years after the Proclaimers released it on their second album, “Sunshine on Leith”, in 1988.

I rediscovered their third album, “Hit the Highway” (1994), this morning when I heard “I’m gonna be” on the radio, and I found I still like it a great deal. The Proclaimers’ music is described as folk pop, or Scottish pop. I think what I like about their music is that the voices of Charlie and Craig Reid, who are twin brothers, blend together so well, and their Scottish accent!

There are a few slow songs on the album, but I prefer the louder, more “proclaiming” ones, like “Follow the money”, “Don’t turn out like your mother” or “Shout Shout” – and of course “I’m gonna be”.

They are about to release their next (fourth) album, and you can download “No particular Place To Go” as mp3 from their site.