The Economist: The new nationalism. “With his call to put “America First”, Donald Trump is the latest recruit to a dangerous nationalism.”

“When Donald Trump vowed to “Make America Great Again!” he was echoing the campaign of Ronald Reagan in 1980. Back then voters sought renewal after the failures of the Carter presidency. This month they elected Mr Trump because he, too, promised them a “historic once-in-a-lifetime” change.

But there is a difference. On the eve of the vote, Reagan described America as a shining “city on a hill”. Listing all that America could contribute to keep the world safe, he dreamed of a country that “is not turned inward, but outward—toward others”. Mr Trump, by contrast, has sworn to put America First. Demanding respect from a freeloading world that takes leaders in Washington for fools, he says he will “no longer surrender this country or its people to the false song of globalism”. Reagan’s America was optimistic: Mr Trump’s is angry.

Welcome to the new nationalism.”

I went to Berlin for a seminar yesterday and today. Last night I met friends for dinner, then went for a walk to the Brandenburg Gate. Although it’s been 27 years since the Berlin wall fell, it still chokes me up to actually be able to walk through the gate. 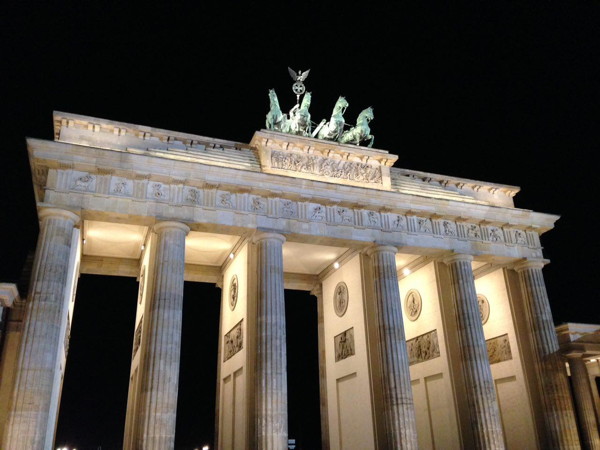 dangerousmeta: A little election math, for those afraid of their fellow citizens. And a rant.

“[Stop mouthing off on social media, get serious, get organized. Stop posting sh-t after a 30-second read finds you an echo-chamber article that gives you an ideological orgasm. Fomenting hate just makes things worse. Find a cause and volunteer. Defend what you love, don’t sit and bitch on Facebook – it’s the precise definition of impotence. As effective as putting ‘daring’ bumper stickers on your g-d car.”

Vogue: Michelle Obama: A Candid Conversation With America’s Champion and Mother in Chief.

“On the eve of her departure from the White House, First Lady Michelle Obama has never been a more inspiring ﬁgure—America’s conscience, role model, and mother in chief.”