The Schockwellenreiter also has this link to The Mac Aquariums. I think I’ve seen the site before, but I couldn’t find a link on my pages, so I guess I didn’t mention it before.

“Education is what survives when what has been learnt has been forgotten.” – B. F. Skinner

(Skinner? I heard about him and Behaviorism in a lecture on the psychology of learning. Dark memories…)

Poor Craig – it’s still hot in Texas. Meanwhile, the weather forecast for our region has been improving. We are supposed to get some sun and warmer weather on Wednesday, the temperature increasing to over 30 or 35 Â°C (around 90 F) next weekend!

Ever heard about it? Here is the LISA Home Page of the NASA. What is LISA? (Part of the LISA crew works in Hanover, Germany.)

With LISA, scientists hope to be able to “hear” the gravitational waves emitted from black holes and maybe even an “echo” of the big bang!

Last week, the Third LISA Syposium was held at the Max-Planck-Institut for Gravitational Physics in Potsdam, Germany. Here is a press release with attached information on gravitational waves and detectors. (Scroll down a bit.) (Den Artikel gibt’s auch in Deutsch.)

Were you wondering why I’m so very interested in the LISA project? Professor Karsten Danzmann is the leader of the European LISA group, and I attended his two year course called “Introduction to Experimental Physics” while studying in Hanover (1994 to 1996). Of course, he would talk about “his” project from time to time. He’s very enthusiastic about it, and has even named his daughter Lisa. (Or was it the other way round?

Hey! The Curmudgeon will be famous!

He is featured in this article about weblogs: Staying Afloat on Weblogs. Well, Dave Winer is mentioned as well, and the whole ETP and Weblogs.Com community, too.

And Al, thanks for linking to me, but I’m not everybody… 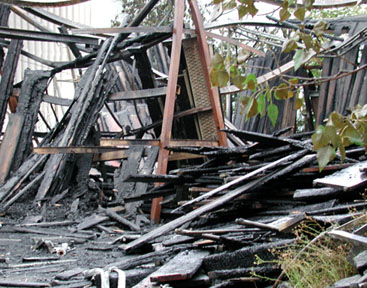 After it has rained all morning, I went to see what was left of whatever building was burning last night. Since I never really noticed it before, I’m not sure how large it was, but it seems it was a wooden building of a company that makes scaffolding. Presumably, they stored something wooden inside because the hole thing burned like tinder.

Because the whole property is surrounded by fence, I was not able to get a very close view; this is all I could manage.

Note the bent iron beams – the fire must have been very hot!