To all my readers, merry Christmas and a happy new year!

Without further comment, I give you Mr. Bean’s Nativity Scene.

It’s been snowing quite a bit here during the last week or two, and by now we have about half a metre (19 inches) of snow, I think. I took some photos on Saturday morning, when there was much less snow than now. 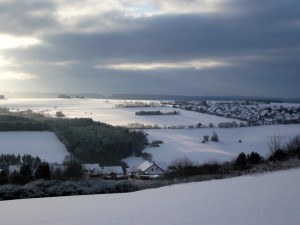 This was taken during a walk around our village on Saturday morning, before it started snowing non-stop for the rest of the weekend.

I think this is the most snow we’ve had where I live since the winter of 1979, when the snow was higher than I was tall. Of course, I was a bit younger then…

Sometimes I find something worth reading or watching, but before I get around to posting it here, it gets posted on MetaFilter. And sometimes this happens twice in one day.

Robert Krulwich poses the question on his weblog: How Big Was It, Really? and compares the distances on the first moonwalk to a football or baseball field.
The next day, Neil Armstrong writes to Krulwich: Neil Armstrong Talks About The First Moon Walk.
(MetaFilter: The Original MoonWalking)

“Photographic documentation of a Space Shuttle launch plays a critical role in the engineering analysis and evaluation process that takes place during each and every mission. Motion and still images enable Shuttle engineers to visually identify off-nominal events and conditions requiring corrective action to ensure mission safety and success. This imagery also provides highly inspirational and educational insight to those outside the NASA family.
This compilation of film and video presents the best of the best ground-based Shuttle motion imagery from STS-114, STS-117, and STS-124 missions. Rendered in the highest definition possible, this production is a tribute to the dozens of men and women of the Shuttle imaging team and the 30yrs of achievement of the Space Shuttle Program.”

(MetaFilter: Houston we have ignition) More than a year ago I ordered a Robert Kaufman Kona Cotton Color Card from Pink Chalk Fabric and chose 41 potential colors, of which I ordered a quarter yard each. When the fabrics arrived in January, I played around with them for quite a while until I settled on 24 colors that would go into the quilt: four reds, ten blues and ten greens.

I loosely followed the instructions for the Plain Spoken quilt in The Modern Quilt Workshop by Weeks Ringle and Bill Kerr of Funquilts.

Some technicalities for the fellow quilters among my readers (and for myself as documentation):

The colors are in no particular order

I didn’t sew random pairs of wide and small strips as was advised in the instructions, but placed each rectangle before sewing them together in rows. Then I sewed the rows together to finish the quilt top.

The quilt was machine-pieced and machine-quilted, and the binding was attached to the front by machine as well. I used the Pfaff 230 treadle sewing machine from 1955 I got from my grandma for everything except sewing the binding to the back of the quilt, which was done by hand.

I pressed the seams open, basted with safety pins and quilted using a standard presser foot. I wore rubber gloves during quilting in order to have a better grip on the fabric; I had to move the quilt manually because the feed dogs are not strong enough to pull the weight of a big quilt.

The binding strip was cut 8cm wide and the pieces sewn together diagonally to reduce bulk at the seams. The exception was the part for the red corner, which was sewn together straight because I preferred the finished look. Then the binding strip was pressed in half lengthwise and attached to the front of the quilt by machine. I sewed it to the back by hand using “invisible” stitches, which took ten hours for the whole 7m.

Finally, some photos. Click to see a larger version. The front and the back side of the quilt. I used some leftover blocks from the front. The main backing fabric is Kona Cotton Sage. The finished quilt on the couch in our living room. I picked the colors from the couch, the pillows and the table runner. Another shot of the back. You can see the quilting in this picture. If you look very closely, you can see that the stitch length is not very consistent, unfortunately, because of the difficulties mentioned above. The red corner. When I chose the color for the binding, I didn’t realize that it would match one corner of the front. I didn’t like the idea of a monochromatic corner, so I pieced a bit of red in there. I think it adds a nice touch. You can see it better in this shot taken during sewing.

I liked almost all of the snow pictures on the Boston Globe’s Big Picture yesterday, but the parhelion (second from the top, direct link) is my favourite.