Since the weather was still unusually balmy and sunny for November André and I went for another long walk yesterday, Sunday. We went to the Wagbachniederung, which is a protected area not far from us. It is known for attracting birds, especially migratory birds, as the area is very boggy and has large areas of water and reeds.

We took our binoculars and saw a lot of the species that we expected, for example around twenty Great egrets (Silberreiher), which are not usually found in Germany. Of course we also saw the much more common Grey heron (Graureiher) and hundreds of cormorants (Kormorane).

I was most surprised though when we saw this animal: 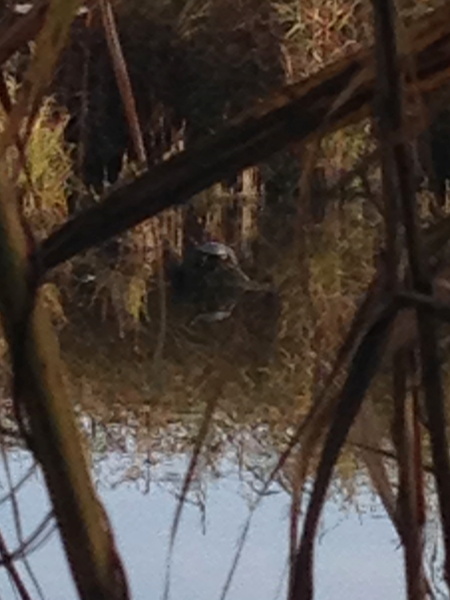 See it right in the middle of my horrible cellphone photo? It’s a turtle!

Unfortunately it was too far away to make out any details, so identification is difficult. It might be a European pond turtle (europäische Sumpfschildkröte), but it’s quite large in that case. Another possibility is that it is a Blanding’s turtle (Amerikanische Sumpfschildkröte) that has escaped from captivity. I guess we’ll have to take a proper camera with a good tele lens the next time we go there…