Have you read this on MetaFilter?

3. Imagine that the self-declared winner’s “victory” turned on disputed votes cast in a province governed by his brother.

6. Imagine that hundreds of members of that most-despised caste were intercepted on their way to the polls by state police operating under the authority of the self-declared winner’s brother. […]

9. Imagine that the self-declared winner, himself a governor of a major province, had the worst human rights record of any province in his nation and actually led the nation in executions.

10. Imagine that a major campaign promise of the self-declared winner was to appoint like-minded human rights violators to lifetime positions on the high court of that nation. […]”

Aaah, we had a wonderful dinner tonight. André fried salmon, and we had broccoli and rice with it. Delicious! 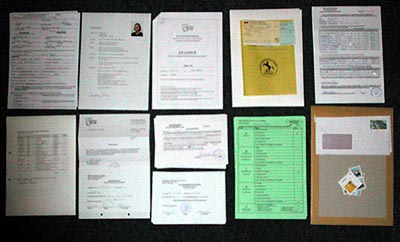 After dinner, I attacked the paperwork for my exam registration – for the last time. I have to hand in about 40 pages, as you can see above. Note that we even have to hand in the envelopes and stamps they are going to use to send mail. The large one is for the diploma – in case I pass the exams. I wonder if I will get a refund for the stamps in case I fail…

Finally, it’s all done now and I’m ready to go and register on Monday morning. My appointment is at 9:30 am, and I hope it won’t take longer than an hour. 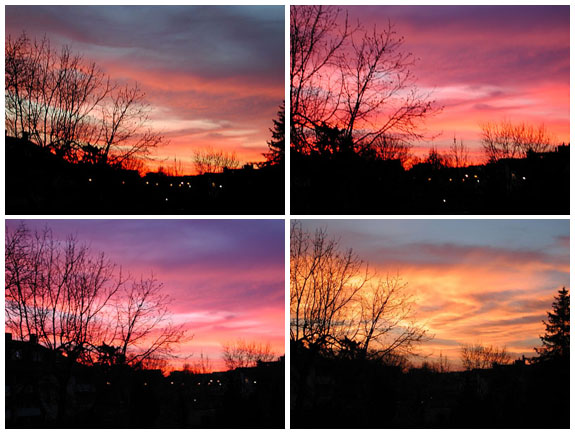 I took the first three pictures between 7:40 and 7:50 am yesterday morning. The last picture (lower right) was taken 20 minutes after the first three. You can see that the street lights have been turned off in the meantime. And no, I didn’t enhance the colors with Photoshop!

I have to admit that there are some good sides to getting up early, even in the wintertime when it’s still dark outside. In this case, it was not only the beautiful sunrise, but also the fact that the registration office is not crowded at all at 8:30 am.

I had to get a new ID (Personalausweis), but when I first went to the registration office on Thursday afternoon, there were more than a dozen people waiting, so I decided to come back the next day. Good idea!