The New Yorker, March 6, 2017 Issue: Annals of Diplomacy: Trump, Putin, and the New Cold War. “What lay behind Russia’s interference in the 2016 election—and what lies ahead?” By Evan Osnos, David Remnick, and Joshua Yaffa.

“Strobe Talbott, the former Clinton adviser, said, “There is a very real danger not only that we are going to lose a second Cold War — or have a redo and lose — but that the loss will be largely because of a perverse pal-ship, the almost unfathomable respect that Trump has for Putin.” Talbott believes that Trump, by showing so little regard for the institutions established by the political West in the past seventy years, is putting the world in danger. Asked what the consequences of “losing” such a conflict would be, Talbott said, “The not quite apocalyptic answer is that it is going to take years and years and years to get back to where we—we the United States and we the champions of the liberal world order—were as recently as five years ago.” An even graver scenario, Talbott said, would be an “unravelling,” in which we revert to “a dog-eat-dog world with constant instability and conflict even if it doesn’t go nuclear. But, with the proliferation of nuclear powers, it is easy to see it going that way, too.”

Andrei Kozyrev, who served as foreign minister in the Yeltsin government, now lives in Washington, D.C. He left Russia as it became increasingly authoritarian; he now sees a disturbingly similar pattern in his adopted country. “I am very concerned,” he said. “My fear is that this is probably the first time in my memory that it seems we have the same kind of people on both sides—in the Kremlin and in the White House. The same people. It’s probably why they like each other. It’s not a matter of policy, but it’s that they feel that they are alike. They care less for democracy and values, and more for personal success, however that is defined.”“

“Congressional Republicans could soon vote to repeal Obamacare. John Oliver explores why their replacement plans are similar to a thong.” 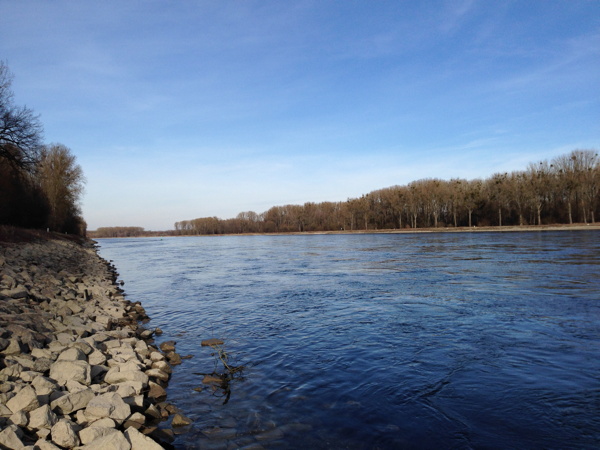 We had really lovely weather these past days, really spring-like and almost warm at 12°C (54°F), so I went for long walks three days in a row. This photo is from yesterday and shows the river Rhine roughly at the point that is closest to our house.

The Atlantic: I Was a Muslim in Trump’s White House. “When President Obama left, I stayed on at the National Security Council in order to serve my country. I lasted eight days.” By Rumana Ahmed.

“In 2011, I was hired, straight out of college, to work at the White House and eventually the National Security Council. My job there was to promote and protect the best of what my country stands for. I am a hijab-wearing Muslim woman––I was the only hijabi in the West Wing––and the Obama administration always made me feel welcome and included.

Like most of my fellow American Muslims, I spent much of 2016 watching with consternation as Donald Trump vilified our community. Despite this––or because of it––I thought I should try to stay on the NSC staff during the Trump Administration, in order to give the new president and his aides a more nuanced view of Islam, and of America’s Muslim citizens.