As two of my few remaining loyal readers guessed (1, 2, 3), André and I went to the Northwestern part of the US and the Southwestern part of Canada, namely Oregon, Washington, Montana, Alberta and British Columbia. More specifically, we spent time in the Canadien Rocky Mountains (to which Glacier National Park in the US belongs, at least geologically) and on the coast, including Vancouver Island.

I’m going to post about our trip some more in the future, but today I want to show you someone else’s photo: Sea Anemone Eating Crab in Washington State. This was today’s photo of the day at National Geographic, and it reminded me of the anemones we saw on the coast in Olympic National Park. I was tempted to stick my finger in one of the anemones just to see how they would react, but now I’m glad I didn’t. ;-)

For comparison, here is an anemone which André photographed on Second Beach in Olympic National Park on July 24th, 2008. Click for the bigger version. 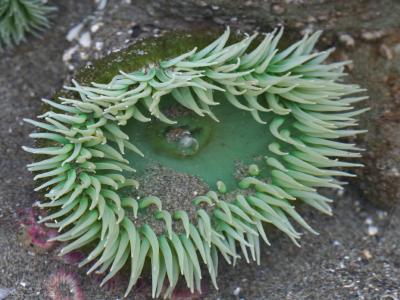