I know, I’m a bit late, but at least here in Germany it’s still Easter. After having visitors for a couple of days before Easter, we spent yesterday and today quite unspectacularly. We went for long walks on both days, in spite of the almost constant snow showers we’ve had for days. I don’t have anything against snow per se, but would much prefer it during the winter, not a couple of days after the official beginning of spring and with temperatures above freezing so it melts almost as soon as it falls.

This is what the landscape looked like yesterday morning as we set out for our little hike: 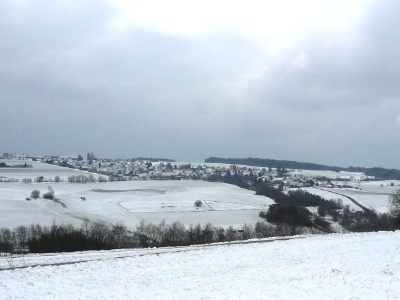 After posting about the Ukulele Orchestra of Great Britain a while ago, I happened upon them again today on MetaFilter. There are some great pieces of them on Youtube. My favourites: Fly me of the Händel, Wuthering Heights (Heathcliff!) and, of course, The Good, the Bad and the Ugly. It’s also worth checking out the video clips on their website to get an impression of the diversity of the songs they play.

When we moved to the Hunsrück a year and a half ago I expected a lot of snow in winter. It rarely snows in Northern Germany (where I grew up) or in Bonn (where I lived while attending university), so I was looking forward to white winters. Alas, we had snow on exactly three days during the two winters we’ve lived here. Two of them were last year, and the third one was today.

Of course, today was also the day of the oral examinations for the Abitur at my school. When we got up at six, it was snowing heavily, and 5cm (2 inches) of snow were already on the ground.

I left for school an hour later but had to wait for a colleague with whom I carpool. She lives half an hour from us, but it didn’t snow there when she left, so she was quite surprised to find a winter wonderland on the Autobahn. Together we set out for school at a quarter to eight after phoning the school to let them know that we were on our way and trying our best to be there as soon as possible. However, the answering machine came one, which I thought odd on an exam day. It turned out later that nobody had made it to school at that point.

The Autobahn had not yet been ploughed, so the 40 km (25 miles) from our meeting point to school were a fun ride. It took us almost 90 minutes instead of the usual 30 to get to school, and other colleagues called us while on the road, reporting where they were and where traffic was moving. It turned out that a lot of people were stuck a few hundred metres (yards) from our exit for almost an hour for no apparent reason, but at least a few people had arrived at school in the meantime, so the phone was manned and word spread that all exams were delayed by at least one hour.

When we finally arrived around 9:30, we were greeted with the good news that three of my students were already there, so I could proceed with the first set of exams. Instead of following the carefully worked-out plan exams were scheduled for 30 minutes later whenever the required students and teachers arrived, and the whole atmosphere was very unlike previous examination days. Teachers and students alike were greeted with applause when they arrived and compared how long it had taken them to get to school and how many stranded cars and trucks they had seen on the way. The first person to arrive at school actually was a student who hiked to school through the snow for 6 km (4 miles) while it was still snowing heavily because she didn’t want to be late for her exam. Now that I call determination!

The way home took a good half hour with no snow on the Autobahn, but great views across the snowy landscape in the sunshine. When I arrived home, I felt slightly light-headed until it occured to me that all I had eaten that day was a banana. (I feel much better now that I’ve had dinner, thankyouverymuch.)

This certainly was an examination day that I will remember, and I’m sure the students won’t forget it either.