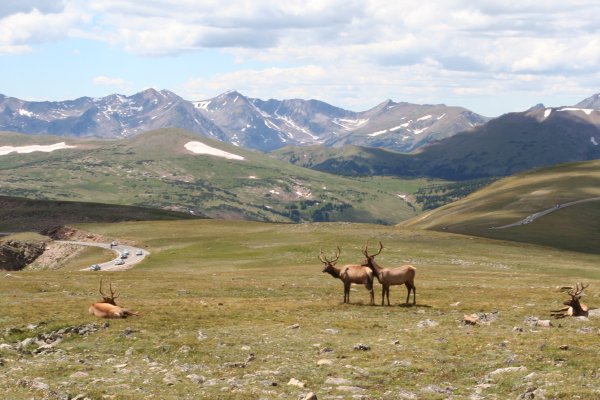 Back from the USA

On the day before yesterday – or rather, the day before that since it is now almost 3 am (stupid jetlag!) – André and I returned from our trip to the USA. The flight back was uneventful, but our car required a jumpstart to get going again because the battery was completely empty. Of course only then did I remember being told that the battery was pretty old and would probably die sometime soon the last time I had the car checked.

Driving home from the airport in Frankfurt, the traffic on the German Autobahn was horrible compared to the almost 5,000 miles (no typo!) we drove on US highways and interstates, but we made it home okay. (And the car got a new battery yesterday after it failed to start even once.)

Since then we’ve been busy with the usual things you have to do after a long trip: unpacking, washing load after load of dirty hiking clothes, refilling the fridge… and sleeping. My body is completely confused because of the jetlag, so I spent much of last night awake and much of today asleep. I’ll have to work on that before I have to go back to school on Monday.

You’re probably going to find stories and photos of our trip here in the near future (thanks to taking along a digital camera instead of slide films like last time), but for now I have one question for you folks familiar with roads in Wyoming.

When we drove out of Yellowstone National Park and back to the airport in Denver via Cody, Caspar and Cheyenne, we came across several gates across both state and federal highways and even on I-15 like you would find at a railway crossing. Half a mile before them we usually saw a sign with lights on top saying “Road closed ahead if flashing”, telling you to turn back to whatever town you last passed if the gate was closed. However, the lights never flashed and there was no explanation as to why the road might be closed with these devices, and we weren’t able to guess. Is it because it snows so much there in winter and there is too little traffic to warrant snow ploughing? Is it because of strong winds? Darkness at night? Aliens?

If you know, please drop me a line in the comments or via e-mail. Thanks!

P.S.: We heard of hurricane Katrina on our last day in the US, but only grasped the full extent of it now that we’ve proper internet access at home. I’ll leave it to the many other bloggers to point out news sources etc.