Northern Lights in the South

The sky was completely obscured by clouds yesterday and the night before, but today it was clear, so André and I headed out of Bonn around ten to find the northern lights that one supposedly had a chance to see here. A few kilometres out of town, we stopped in the fields and saw – wow! – half of the sky was lit up in pink. There also were some greenish areas. The lights seemed quite bright to me, but I’ve never seen northern lights before, so they could be pale compared to what you get in, say, Norway.

Anyway, we were duly impressed by the show and set up the camera on a tripod. The only problem was that I couldn’t figure out how to get it to make an exposure that lasts for longer than one second. And – you guessed it – I left the instruction manual at home, so the first exposured didn’t reveal anything but two or three broken pixels, one right in the middle of the pictures. If I had had a mobile phone, I might have considered giving Susan a ring for instructions…

Since the lights disappeared after a while, we decided to go home to fetch the manual and then to return and see if we could get some lights on film memory card. Alas, the lights did not return, and near midnight we decided that it was getting cloudy and we were getting cold and tired, so we drove home. This is the only shot in which you can see a little bit of colour in the sky. 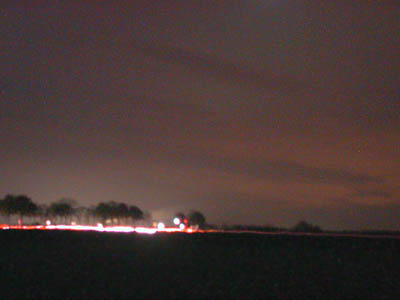 The traffic and traffic lights are in the picture because I wanted to see how the long exposure time worked; it was about 40 seconds here.

If the sky is clear again tomorrow (or maybe early this morning?), I might give it another try.

According to AstroAlert, there was a major solar flare at 04:35 UTC on 28 October. The page has more information and some spectacular images as well. The solar flare may result in auroras (Nordlichter!) that may be visible in low latitude areas on October 28 and 29. Since northern lights are almost never visible at my latitude, I will certainly try to see some tonight.

Hint: Many of the following resources (sites, programs) are availabe in English as well as in German. Sorry for sticking to German for many of these… I’m doing research for my upcoming exams, so it made more sense and was faster to do it in German.

This MetaFilter thread has links to some fantastic sites: Wholemovement is the website of Bradford Hansen-Smith, who makes mathematical sculptures from paper plates. Take a look at the gallery! There are some instructions as well. And speaking of paper plates: paper plate education is well worth a look, too.

Today, André and I visited the Kunst- und Ausstellungshalle der Bundesrepublik Deutschland, one of the museums here in Bonn. The KAH houses different exhibitions, many of which are very good and worth seeing. Today was the last day they showed Japans Schönheit, Japans Seele (Japan’s beauty, Japan’s soul) with exhibits from the Tokyo National Museum (site in Japanese and English). The exhibition is said to be the biggest and most spectacular exhibition of Japanese art since World War II. There also were No masks and photos from a camera museum. All the texts on the pages linked above are in German, but you can see lots of photos of the exhibits; for example, take a look at this shogun! Even more photos are available here on the website of the Tokyo National Museum; here’s the same shogun up close and personal.

The other exhibition we visited is Azteken. It was done in cooperation with the Royal Academy of Arts, so there’s a site about the exhibition in English: Aztecs. There were a lot of very impressive sculptures, some of which you can see here.

There is a lot of fun mathematical stuff on Jürgen Köller’s Mathematische Basteleien, for example origami, puzzles and some playing with numbers. Even though the title is German, almost all of the pages are available in both English and German.

One of the origami classics: How to make an origami crane. Divided into several pages, lots of photos to help you along.

Grand Illusions a “site for the enquiring mind. With optical illusions, scientific toys, visual effects, and even a little magic.”

Colour on the Computer

Yet another colour scheme chooser that looks interesting. (I previously linked to A recipe for color and Martin’s 6-Colormatch. I should start to collect these things in one place, it seems.)

Jeanne and Aaron bought a 1914 bungalow in Chigago with the intention to restore it by themselves. They chronicle their advancement on a weblog named House in Progress. The previous owner of the house seems to have collected anything and everything and left a lot of the stuff behind when she moved out. Now they are sorting through it all, giving some away, selling other stuff at a garage sale. Take a look at descriptions and photos of memorabilia, kitchenware and mysterious things from the last few decades: What on earth? (page contains a lot of small images and will take some time to load).