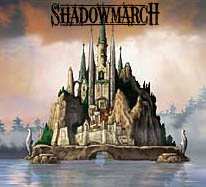 This is a must-read for all Tad Williams fans, and a great opportunity for those who don’t know him yet: Shadowmarch. This is an epic fantasy novel, probably not unlike Memory, Sorrow and Thorn. Shadowmarch is only available online, and three episodes have been released so far.

Although there seem to pe plans to restrict at least parts of Shadowmarch to those who are willing to pay for a subscription, everything is free for now.

Besides the story itself, there are galleries with drawings of the characters, some other goodies and a message board, on which I read that a German radio station is planning to produce a radio series based on Otherland. It’s going to be 24 x 55 minutes long – twice as long as the German Lord of the Rings series. Wow!

Lots of work to do… the exams are getting closer. I don’t know the exact dates yet, but the written exams are in August and the first half of September. And I really wish I had not chosen algebra for the math exam. Galois theory, anyone?

The three exams in physics (atomic physics, nuclear and particle physics, physics didactic) don’t scare me as much, and I refuse to worry much about pedagogics, for which I have read about a dozen books, and that’s about all I can do. We’ll se how it goes.

Whoops – I meant to post this last night, but I fell asleep while reading about 9 pm, and I didn’t really wake up until eight this morning! It seems the hot weather can be exhausting, but I still like it. We’ve been enjoying sunshine and temperatures in the thirtees (around 90Â°F for those of you who think in Farenheid) for days now! I love summer, and I’d love this one even more if I didn’t have to prepare for those exams…