“Former Beatle George Harrison, the singer, songwriter and guitarist for one of the world’s most famous pop groups, has died after losing his battle against cancer.

Harrison died on Thursday at a friend’s Los Angeles home, at 1330 local time, according to his longtime friend Gavin De Becker. “

I expect there are going to be more links over at BookNotes later today. 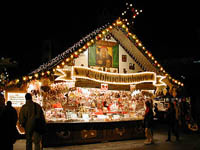 I had to run a few errands in town yesterday and took my camera along to get a few shots of the Weihnachtsmarkt (Christmas Market) after dark. Here they are, especially for you, Garret.

“uncontrol is an interactive exercise that explores the themes of anthropomorphism and kinetics. using Macromedia Flash, I developed experiments that express these themes using only basic forms: lines, splines, rectangles, and circles.” And it’s fun! Be sure to try and draw your own pictures (number 25 in the navigation; read the howto, then click draw).

Belated thanks for the congratulations, David!

(I really need to update my list of favourite blogs over at Blogtracker.)

André and I went to see Harry Potter and the Philosopher’s Stone last night. The film started at 10:30 pm, and there were exactly 20 people in the theater (which holds around 180, I think), including ourselves. The small number was not surprising though because it was very late on a weekday and because we watched the non-dubbed English version of the film. Not many people in Germany seem to like watching original versions.

The film stays pretty close to the book, as far as I can remember. (It’s been close to two years since I’ve read the book.) Of course some things had to be left out, and I think some things in the film are difficult to understand if you haven’t read the book before watching it. For example, Neville Longbottom’s toad appears in the book all the time, but only twice in the movie. Draco Malfoy’s two friends barely appear in the movie although they appear often in the book.

The actors in the film were all very good. I think Harry should have stood out a bit more; there are a few scenes in which Ron or Hermione steal the show. On the other hand, I have to agree with the author of the review mentioned below (in German): Readers of the books will be able to keep up their own image of Harry even after watching the movie because he is not as outstanding as he could have been.

All in all, I agree with Mollie’s review of the film.

The UN Talks on Afghanistan take place on the Petersberg right outside of Bonn. When Bonn was still the capital of Germany, the Petersberg was the Bundesgästehaus, the hotel for foreign guests of the government. You can see it on some of
my photos: It’s on one of the hills in this photo of Langer Eugen, and the building is visible in the photos on the right. It’s always exciting when political action is taking place right on your doorstep.

I snatched the title from Scott. School’s out – for now. I’m not going to mention that I’m probably going to spend the rest of my working life in school…

By the way, all those links made my site number 37 in the Daypop Top 40 Links today. I didn’t know the list existed, but it showed up in my referrers.

It feels great to waste some time without feeling guilty. Today I did profane things like going shopping and cooking – things I haven’t done for weeks, thanks to André. He was very supportive throughout the past year, and now it’s my turn to pay him back!

However, I still feel exhausted. It’s similar to that tiredness you feel the day before you get down with a cold or flu, but I don’t think I’m going to be ill because I felt the same way after the other exams. Strange how mental work can make your body tired. I’ll be better tomorrow, and now I’m going to bed.