Kenneth Snelson: “Tensegrity describes a closed structural system composed of a set of three or more elongate compression struts within a network of tension tendons, the combined parts mutually supportive in such a way that the struts do not touch one another, but press outwardly against nodal points in the tension network to form a firm, triangulated, prestressed, tension and compression unit.”

“Buckminster Fuller coined the word tensegrity from tension and integrity five years after I first demonstrated to him the principle I had discovered.”

You can read more about tensegrity at Kenneth Snelson‘s FAQ.

There’s more info in this Wikipedia article, which is labeled as “needs cleanup” at the moment. You can read a little more in the article about Buckminster Fuller.

I don’t remember when I first heard or read about them, but my interest was renewed a while ago by this MetaFilter thread which links to Snelson’s Structure and Tensegrity.

Looking for more info on these fascinating structures I found The World of Geometric Toy by Akira Nishihara’s. He writes: Tensegrity structure is composed of tension(rubber band) and compression(rod). The grammar is not perfect, but the idea is made clear.

Besides, Nishihara’s site is full of fun toys, both polyhedral and geometric. I think I’ll have to try to make an origami spring or a popup spinner.

George Hart (a guy crazy about polyhedrons; linked to him a long time ago) has a page about Soda Straw Tensegrity Structures which he suggests as a classroom project for middle and highschool students.

Jim Leftwich built an 18″ 270-Strut Tensegrity Sphere and has a lot more information and interesting links on his page. He also founded a company called Design Science Toys (and I don’t dare to look at all the stuff out of fear that it might want to buy everything… 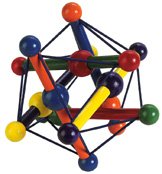 In case you want to cool down in a cool way, go ahead and build a tensegrity shade structure.

Strangely, somebody seems to own both tensegrity.com and tensegrity.org, but there’s not much there, while tensegrity.net doesn’t seem to have much to do with tensegrity…

Ah yes, and last but not least: the children’s toy that inspired me to find out more about tensegrity is Skwish, a colourful tensegrity structure that I saw on a photo of a friend’s six-months-old son. If toys like that had been around about thiry years ago, I might have a more impressive job than math teacher today…

If you want to link to this entry, please use http://serendipita.org/tensegrity/.