We got up at 8 am and had breakfast at “Roxanne” as usual. Then André took the CalTrain to Dave. UserLand had its first meeting with all people – including Brent, who flew in from Seattle, and André in one place.

I had planned to visit the San Francisco Museum of Modern Art without André that day, but unfortunately it is closed on Wednesdays. I went to Golde Gate park instead. 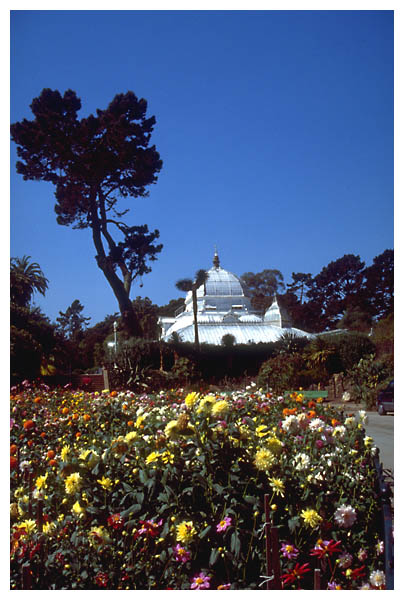 My first stop was the Conservatory of Flowers on the eastern end of the park. It was damaged in the 1989 earthquake and in winter storms in the mid-nineties and is closed to the public, but I enjoyed the flowers outside the greenhouse nevertheless.

I went on to the Steinhart Aquarium and the California Institute of Sciences. I wanted to visit the Aquarium because I dimly remembered it from visiting it on the exchange in 1992.

The Aquarium has many interesting fish and other sea creatures, but the most impressive thing probably is the fish roundabout. It has a diameter of 180 ft, and rays and other large fish live in it. You enter the roundabout from below by means of a spiral ramp that leads you up inside the roundabout. It gets darker as you proceed, and then you literally dive into the fish’s world. I almost got dizzy from looking at the fish which swim round and round and round…

In the terrarium, I stood face to face with a real monster… 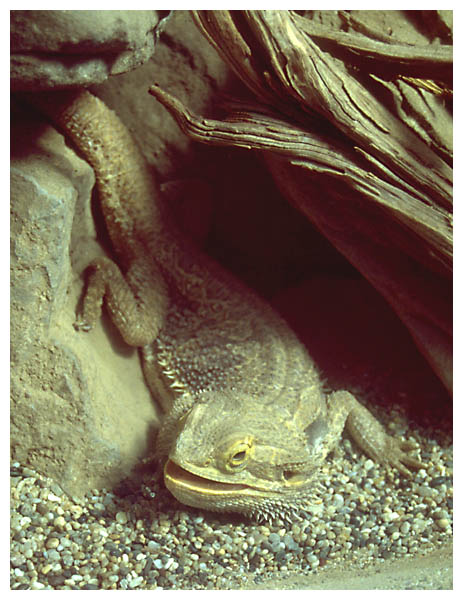 This is a Bearded Monster, which was one of the few animals that moved slow enough for my camera. I also tried to photograph some fish, but they moved too fast. You can’t use a flash and need long exposition times, and the fish are just too quick for that.

I also visited the rest of the California Institute of Sciences, which includes the Life through Time and Wild California exhibits and a movie theater with an earth quake simulation.

There is a whole little exhibition about earthquakes that explains how they occur, what damage has been done in “famous” earthquakes and how to react when an earthquake hits.

Since there are only very few earthquakes in Germany, I was curious about how an earthquake feels. The earthquake platform in the little movie theater was a good – and safe – opportunity for me to find out what an earthquake is like.

The film states facts about quakes, and from time to time the floor starts to shake. The quakes increase in strongness until the last quake near the end of the film that simulates the Great Quake of 1906.

Although you know that the floor will quake during the film, it is a scary experience. I had not realized how much I take it for granted that the earth underneath my feet is as solid an unmoving as – well, as a rock. And although I thought I was prepared for the quakes, they came unexpected and were quite scary. I guess I can now understand much better how terrifying an earthquake can really be – especially when you are inside a building or a city where everthing might collaps.

I strolled on through the park and passed the Japanese Tea Garden. Somehow I had missed the fact that this is the most famous sight of the park and didn’t visit it. But I took a picture! 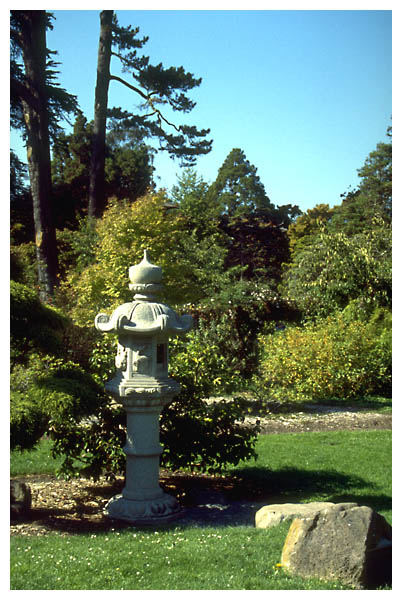 Instead, I went to the Strybing Arboretum. They had little gardens for several regions of the world, for example California, Australia, New Zealand, and a beautiful Garden of Fragrance with chamomile, peppermint, garlic and fragrant flowers and herbs.

Then I went on to Stow Lake, which looked huge on my map of the Golden Gate Park. When I saw it, I was astonished how small it looked because of the large island in the middle, Strawberry Hill.

Late in the afternoon I took a bus back to Union Square and went shopping for books one last time. I bought a book with Southwestern recipes – now we can cook our own delicious food like the one we had at the Café Diablo in Torrey.

I was back at the hotel when André returned from his meeting at 9:30 pm.
We started packing and soon realized that it was a good idea that I had bought a new small backpack that day. Our clothes and all the books we had bought would not have fitted into the travel backpacks we had come with.