We got up at seven, bought huge sandwiches for breakfast and left Lee Vingin for Yosemite National Park (see also here). 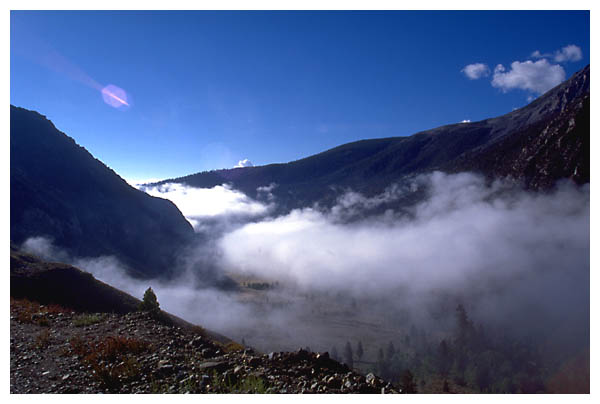 It was a beautiful morning, bright and clear. Once we were above the clouds, we enjoyed sunshine and blue skies.

There were few cars on Tioga Road (Highway 120 inside the park), but the traffic increased noticeably in Yosemite Valley. We went to Curry Village, a camp in the valley. We were lucky to get the last tent for the following two nights.

Afterwards, we went to the Visitor Center and did the usual things: see the slideshow, buy a book, have a look at the exhibition. We also bought tickets for two events in the evening: a film named “No Barriers” featuring a paraplegic man who had climbed El Capitan, and for Lee Stetson playing John Muir.

Next, we headed south to Wawona. We parked at the Wawona Information Station and took a shuttle bus to Mariposa Grove – to the Giant Sequoias. The sequoias at Mariposa Grove are considered the largest living things on earth, at least measured by volume. 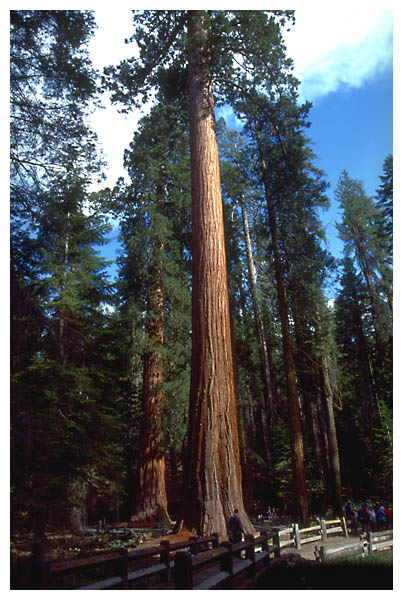 We saw the Fallen Monarch, the Grizzly Giant and the California Tunnel Tree. Sequoias are very impressive trees. Compared to them, other trees loke like dwarfs.

There were signs that reminded the visitors that it is not allowed to take things like plants, rocks or pine cones from National Parks, but a lot of people picked up those huge cones nevertheless, thinking they were sequoia cones. But we looked up into the sequoias with binoculars and didn’t see any of the large cones on the trees. We asked a ranger about that later, and she told us the cones of the sequoias are only the size of a hen’s egg, while the huge cones belong to a sugar pine.

Then we returned to Yosemite Valley to be in time for the film. Here is the valley in the late afternoon sun: 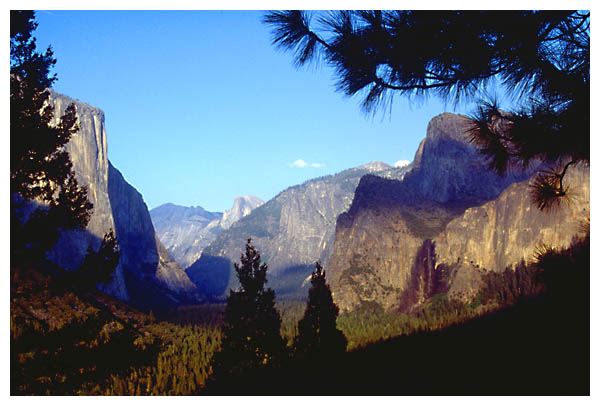 You could tell it was already winter season because all the restaurants and shops in the valley had closed early when we tried to get something to eat. Luckily, one shop was still open, so at least we could buy pre-packed sandwiches. What a great dinner…

The film was very interesting. The man who operates the climbing school in Yosemite Valley gave an introduction. He is a close friend of Mark Wellman, the only paraplegic who has climbed El Capitan and Half Dome. He was an active climber who broke his spine in a climbing accident and thought he had to give up climbing. After a while, he and his friend developed a plan how he could climb again: His friend would climb first, fastening a rope to the mountain. On this rope, Mark Wellman would get himself up by doing chin-ups using a device that would only slide up the rope, but not down again. After a lot of training, he dared to climb El Capitan this way!

After the film, a man got up from the audience and went to the front. He was 86 years old and the oldest man to climb El Capitan. Both of them answered questions from the audience about climbing. I think it is difficult enough to climb a cliff like Half Dome or El Capitan when you are healthy and strong, but it’s almost impossible to imagine how hard it must be for an old person or even a paraplegic.

Then we went over to the other auditorium, where Lee Stetson – pardon, John Muir – sat in front of a fireplace and told stories about his dog Stickeen.
See the John Muir National Historic Site, the John Muir Exhibit of the Sierra Club, and Dunbar’s John Muir Association (managed by Duncan Smeed) for more information of John Muir.

Then we went back to Curry Village. We had to get all food items and also things like sun lotion out of the car because the bears in Yosemite are known to break into cars when they smell anything remotely interesting inside. At the reception in Curry Village, a short video showed how they do it: A bear, standing on his hind legs, puts his front paws on top of a car door and just folds the top part of the door down outside. Then he climbs into the car. Bears have broken into cars for as little as an empty soda can or a stick of chewing gum.

It is also not advisable to keep these things in your tent, so we had to lock our food, toothpaste and the like in one of the lockers outside. Fortunately, the bears have not yet found out how to open these.

It was pretty cold in the tent, which was not that surprising at the end of September and high in the mountains. We didn’t have sleeping bags, but managed all right by wearing thick fleece pullovers to bed.