Since the weather forecast seemed promising, we decided to give Grand Canyon another try because we had not really seen much of the canyon on our first visit. We left Tropic early in the morning, reached Kanab at around ten, found a motel room right away and drove on to the North Rim of Grand Canyon. It had rained earlier in the morning, before we had reached Kanab, but now few clouds remained in the sky, and in this sunny weather it was a pleasure to drive the 70 miles between Canab and the North Rim which mostly led through forest and meadows. 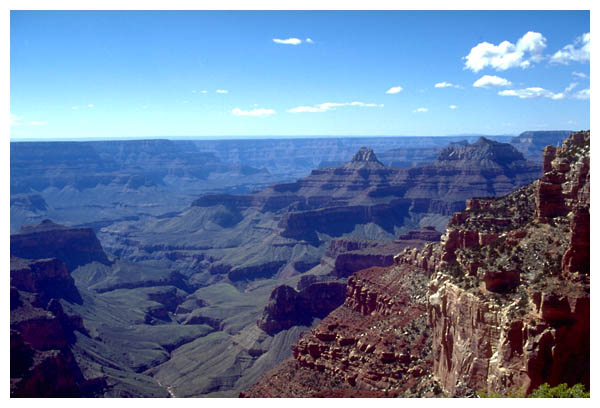 As usual, we first stopped at the Visitor Center. Then we drove on to the Walhalla Plateau that stretches like an island into the canyon. We stopped at most of the view points. At two we arrived at the Walhalla Overlook. A ranger took us (and a dozen or so other tourists) to the ruins of an Anasazi village. We had heard of the Anasazi again and again on our trip, but now we got more information about them.

After the talk, we hurried back to the Lodge near the Visitor Center and close to Bright Angel Point. We didn’t arrive in time for the walk we wanted to participate in, but caught up with the group 15 minutes late. The ranger talked about how Grand Canyon was created and explained the different kinds of stone layers you can see inside the canyon. Suddenly, she interrupted herself in mid-sentence and pointed to the sky. There were two huge black birds – California Condors!

Back in the fifties, there were only about 20 condors left, and after much debating, they were captured and brought to the zoos of San Diego and Los Angeles. Fortunately, the attempt to breed them in the zoos succeeded, and a few years ago some of the young condors were set free again after the first attempt failed because they were not able to feed themselves. I think some also landed on overhead power lines and were killed. The ones that have been set free recently seem to do fine so far because they have been trained to avoid dangers like power lines. They each wear a transmitter so they can be tracked. There are about 120 condors in the USA again as of today. 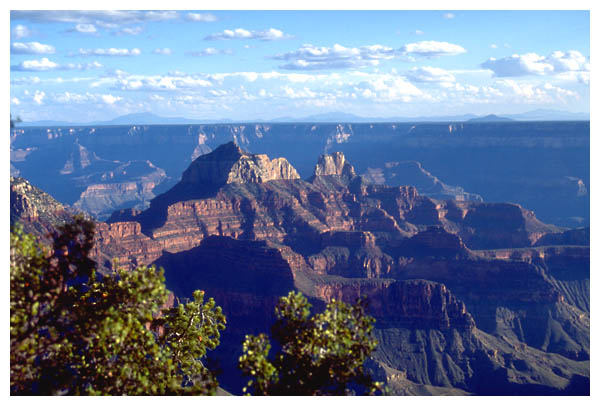 After this little talk about condors, we continued on our walk until we reached Bright Angel Point which offers a spectacular view of the canyon. We stayed there for a while and enjoyed the scenery.

For dinner, we went back to the lodge and bought a 14-inch pizza for the two of us and returned onto the path to Bright Angel Point with it so we could watch the sun set over the canyon while eating. We found a nice place with a bench, unpacked the pizza and started eating. Soon people who passed by called out: “Hey look, they got pizza! Where did you get that?” When we told them we got it at the lodge, they would hurry on as if they were afraid there was none left. It was fun! 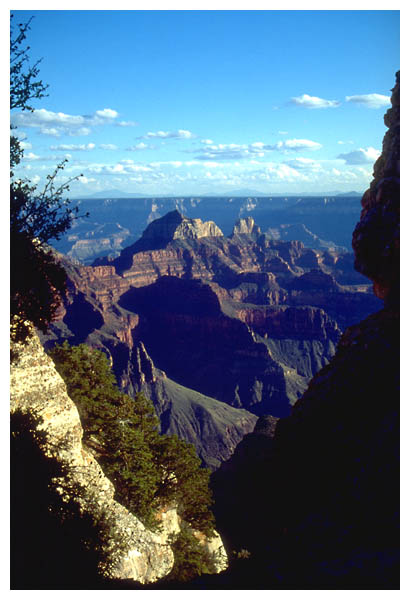 When the sun had almost disappeared, we could see little flashs on the other side of the canyon. They were the flashs from the cameras of the tourists at the South Rim, more than 12 miles away. What a strange sight!

After it got dark, we drove back to Kanab. On the way, we lost the hour we had gained in the morning because Kanab is in Utah, while Grand Canyon is in Arizona and does not observe daylight savings time. Traveling back and forth between time zones is confusing…