On to Bryce Canyon!

We had a really good breakfast at the “Chuck Wagon”: Earl Grey Tea (hmmm, we had been missing that for two weeks!) and fresh doughnuts from the bakery in the shop. Delicious!

Then we drove on to Bryce Canyon. Our route led us through Dixie National Forest and even a little way through Grand Staircase-Escalante National Monument. Finally, we arrived at Ruby’s Inn, the village just outside Bryce Canyon National Park, but of course, the only hotel didn’t have any vacancies. I guess they’re always booked for weeks in advance!

We went back to Tropic, which we had passed through on our way, and rented a room at the “Bryce Pioneer Village” motel for the next two nights.

We were back at Bryce Canyon at about 2 pm. We stopped briefly at the Visitor Center and found out that a Geology Talk was scheduled for 2:30 at Inspiration Point. So we went back to the car and drove to Inspiration Point. The talk was very interesting, and we learned how the “hoodoos”, the fins and spires, are formed. They consist of limestone, a combination of sandstone and siltstone, and are created by erosion. The bizarre forms are due to the fact that there are at least 200 days every year on which it freezes during the night and thaws during the day.

For further reading on the subject, we can recommend Pages of Stone – Grand Canyon and the Plateau Country by Halka Chronic, published by The Mountaineers, Seattle. It deals with the geology of Western National Parks and Monuments from Grand Canyon to Mesa Verde and from Arches to Petrified Forest.

After the talk, we returned to the Visitor Center to plan our two-day visit. Among other exhibits, there’s a huge relief that shows the whole area between Bryce and Grand Canyon.

Next, we went to Rainbow Point, the southernmost viewpoint in the park. We didn’t see a rainbow there, though, only rain… and it was getting awfully cold! I put on all clothes I could find in the car: a sweater, a jacket and my raincoat, but it didn’t help much. The view was spectacular, although it was cloudy and we could see showers in the distance. There were hoodoos, pinnacles, fins, spires everywhere. 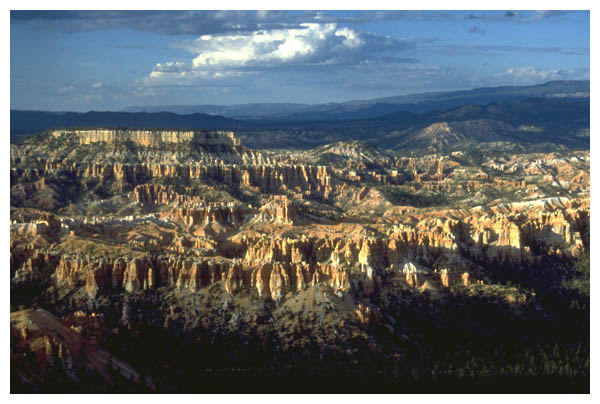 From Rainbow Point, we followed the scenic drive back up north, stopping at most of the view points, until we reached Sunset Point at 6:30 pm. We enjoyed the view into the Amphitheater for a while, but decided not to wait for the sunset because it was cloudy anyway. 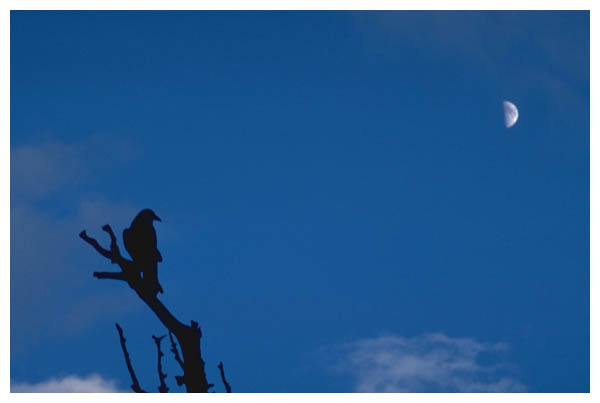 Instead, we went to the Lodge and got some sandwiches for dinner in the general store, and went on to the Sunset Campground for the “Campfire Talk”. I had expected a big campfire with logs around it to sit on, but we found a little hut with a stage and equipment for slideshows and an amphitheater of benches for the visitors. There were about 20 people. In the front, next to the hut, the ranger who gave the talk tried to light the campfire, but had to give up after a while because the wood was too wet.

Then he greeted his audience and turned himself into a hoodoo named “Thor’s Hammer” by putting a styrofoam rock onto his head and speaking with a deep voice and a funny accent. He talked about Bryce Canyon from the hoodoos’ point of view covering geology, plants and animals, and his fellow hoodoos. There were his siblings, some gossiping neighbors, that guy with his camel, a poodle… all illustrated by slides that showed the corresponding hoodoos. It was great fun!

The talk ended at 9:30 pm, and everybody went to bed. I think most of the people in the audience were staying on the camp ground, and we returned to our hotel in Tropic.