Canyonlands day! We had great expectations because someone had told us that Canyonlands is as impressive as Grand Canyon, but less crowded. Today was the day to find out whether it’s true!

Canyonlands NP consists of three parts: There’s the Island in the Sky in the North between the Green River and the Colorado River. It is the closest part to Moab and is called Island because it consists of a large mesa that is accessible only by a narrow stretch of rock. Next to it is the Dead Horse Point State Park, which is an “island” as well and offers a great view over Canyonlands.

The Maze is the western part of the park, to the right of Green River. It is hardly accessible by car, and there are few visitors.

The Needles form the southern part of Canyonlands. It is not connected to the Island by road, but can be reached from Monticello.

After the usual stop at the Visitor Center, we went to Upheaval Dome. This is a large crater-like valley with a curved, dome-like floor. It is not known whether the dome was created by a meteorit or by the salt-containing layers of rock under the dome. Besides some other tourists, there were chipmunks and lizards running around – or lying lazily in the sun.

Next we went to the Grand View Point way in the South, but stopped several times on our way. At one overlook, we talked briefly with an American who had visited the National Parks in Utah several times. When he heard that we wanted to visit Zion, he suggested to visit the “Narrows” there and to walk in the bed of the river. (Here‘s the first day we spent in Zion.)

The Grand View Point offers a phantastic view of the two “steps” in the park: The uppermost floor is the Island (not visible in the next photo), the middle floor has the White Rim all around, and below is the floor in which the Green and Colorado River flow. 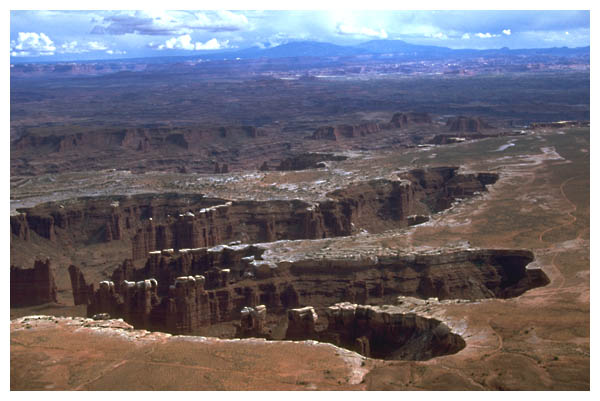 While we were still taking in the scenery, a ranger arrived. An American couple asked if she was giving the talk they had read about in the Visitor Center. “No”, said the ranger, “it’s a walk, but I talk while I walk.”

We decided to come along as well, and soon the four of us were following her on the path that leads along the rim of the Island. The ranger talked about geology, animals and plants in the park and also mentioned that there had been uranium mines in the park. The roads from those years were still clearly visible, even better than the White Rim Road although it has not been used in decades. It takes the desert a long time to reclaim the parts that have been used by men, about a hundred years until the road is not visible any longer!

I found The Legend of Dead Horse Point in the leaflet of the park:

“Dead Horse Point is a peninsula of rock atop sheer sandstone cliffs. The peninsula is connected to the mesa by a narrow strip of land called the neck. There are many stories about how this high promontory of land received its name.

According to one legend, around the turn of the century the point was used as a corral for wild mustangs roaming the mesa top. Cowboys rounded up these horses, herded them across the narrow neck of land and onto the point. The neck, which is only 30-yards-wide, was then fenced off with branches and brush. This created a natural corral surrounded by precipitous cliffs, affording no escape. Cowboys then chose the horses they wanted and let the culls or broomtails go free. One time, for some unknown reason, horses were left corralled on the waterless point where they died of thirst within view of the Colorado River, 2,000 feet below.”

Dead Horse Point offers a grand view over Canyonlands, the valley of Moab and the distand La Sal Mountains. When we arrived, it was a little cloudy, but it looked like it would get better, so we decided to stay and watch the sun set.

Because it was getting later, there were few people left at the overlook, but just before the sun set, several busloads of tourists arrived and spoiled the peaceful atmosphere. But the sunset was beautiful nonetheless! 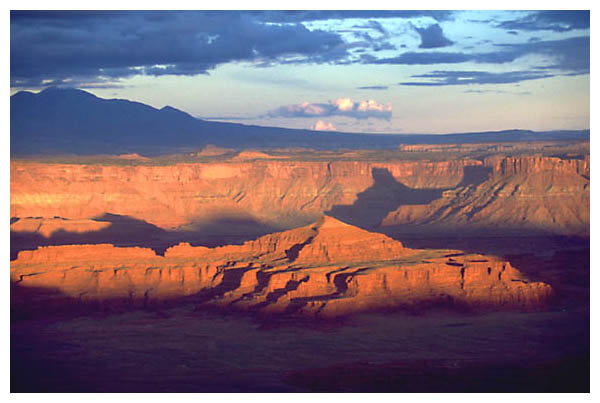