Then we entered the park. All the roads were unpaved, but we saw lots and lots of white cars, 1999 model, with Californian license plates. These were supposedly all tourists, and we decided that if they could drive their rentals cars on the sand roads, we could, too! 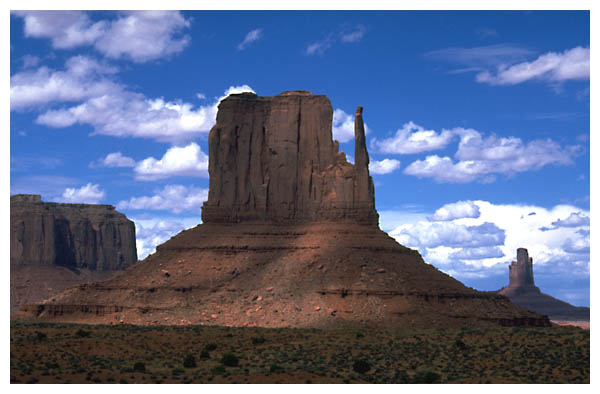 The first buttes we saw were the famous Mitten Buttes and the Merrick Butte. These are well-known from commercials and movies.

We passed several other buttes like the Elephant and the Camel or the Three Sisters (the spikes on the left of this picture). 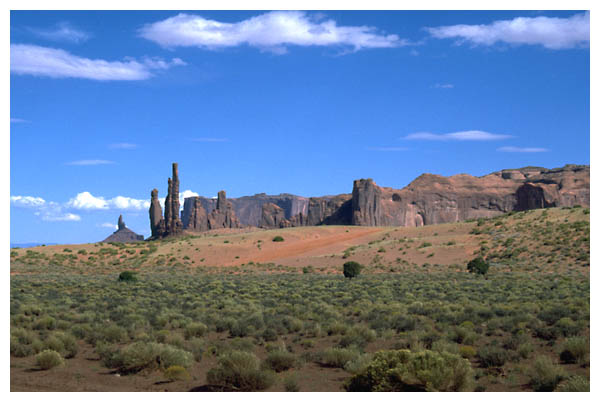 We had planned to spend the night near the park, but the hotel said “No vacancy”, so we decided to drive on to Moab, Utah. That was one of the reasons we left the park in the afternoon. The other is here: 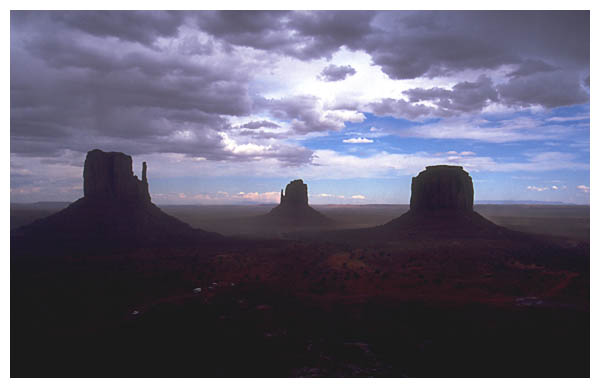 While we were driving through the park, we observed the clouds and feared that a thunderstorm might go down while we are still on the sand roads, but we barely made it out and were near the Visitor Center again when the rain started. André jumped out of the car to take a picture, and when he was back after less than a minute, he was soaking wet!

We drove along Highway 163 into Utah, past Mexican Hat and reached Monticello at 7:30 pm. All the hotels had “Vacancy” signs, so we thought we could drive on to Moab, Utah, our destination. But when we arrived an hour later and drove along Main Road, we only saw “No Vacancy” signs at all the hotels!

The second-to-last hotel had no sign, and when I asked for a room, I was told they had only their two suites left. They were $150 each, with a $15 discount for AAA members. (I’m a member of the German Automobile Club, and we got the AAA discount as well.) But of course we took one of the suites – the alternative would have been sleeping in the car!

I asked the clerk at the hotel why Moab was so crowded, and she told me there was a music festival going on – that’s why all the rooms were taken…