I just came back from Koblenz, where André and I met with Craig for a late lunch – typical German food like Pizza and Pasta

– and then did some sightseeing. (The weather was great, by the way – almost too hot!)

At six, André had to get back home, but I went to the concert of the Austin Girls Choir with Craig. His daughter Leigh Ann (she’s 11) sings in the choir.

They were fantastic! Their performance was really impressive. I was surprised how professional a choir with girls aged 9 to 15 (?) can sound, especially if you keep in mind that the girls were still exhausted from the trip. They only had arrived the previous day! 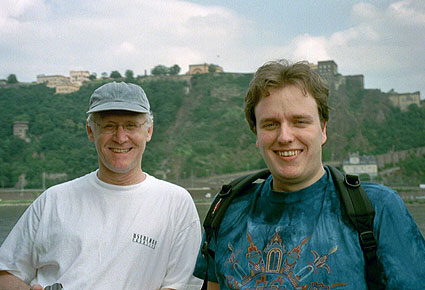 Craig and André on top of the monument