Yesterday, Tad Williams read from his new book at Bouvier in Bonn. He has been here once before, about two years ago, and André and I went and saw him back then. We enjoyed it a lot, so we just had to go and see him again now.

First, Tad read a chapter from his latest book, Mountain of Black Glass, the third part of a four-volume-novel called Otherland.

The next two hours or so, he spent answering questions from the audience. He is a very lively talker and wiggles his hands around a lot, as you can see here:

During the questions and answers, many different subjects came up, and Tad always had interesting information at hand, talked about his opinions in great detail and would occasionally tell a little story…

Here are some examples:

The first question was – of course – what he thought about being compared to J.R.R. Tolkien. More than half of the people in the audience went “Ugh!” when the question was posed, but I have to admit this question comes to mind, especially because Tad’s books are published by the same publisher in Germany as “The Lord of the Rings” and he is almost always called “the new Tolkien” or some such.

Tad said that he has of course been influenced by Tolkiens books. He read “The Lord of the Rings” for the first time when he was ten or eleven, and reread it probably a dozen times before he was 18! And he and his girlfriend even used to write love letters to each other in Elvish. Can you believe it? He even cited the sentence he would sign his letters with, but of course I didn’t understand it because I don’t happen to speak Elvish. (So far, I’ve read “The Lord of the Rings” twice, so maybe it’s high time for another go…)

However, he did complain that some other fantasy writers seem to read Tolkien’s books like it was the bible…

Asked how he goes about his writing, he said that he tries to really see and hear a scene, he vizualizes everything in great detail, inserts himself into the scene. He said that sight was his most important sense that has the most influence on him, so maybe that’s why his books are so visual.

About his relation to other writers and their books, he said:

“I’m gonna let you in in a secret now. At night, when it’s dark in the bookshops and all the lights are off and the staff are gone, my books [he picks up the 700 page hardcover edition of Otherland III] eat other, weaker books – [slams book shut: BOOM!]”

“I never ask other writers if they have read my books. You just don’t do that. […]

About whether he’s optimistic or pessimistic about the future:

After reading ‘Otherland’, some people think he’s being optimistic, maybe even too optimistic, while others say he’s pessimistic. His future as he constructs it in ‘Otherland’ is basically the present, just more so. His writing is optimistic in the sense that no large catastrophe has happened between the present and the time in which ‘Otherland’ takes place. That was unlike many other books, in which “the handy-dandy apocalypse has happened, and people live in the ruins of McDonalds…”

About the research he did for ‘Otherland’:

He has some background in computers because he worked at Apple for a while, and has been involved in online communities since about 1990. Nothing makes a science fiction book more dated than writing about technology in great detail, so he tries not to do that, but talk about the effects of technology instead.

Then someone asked: “Which of all the jobs you ever had (before writing) did you like best, and which was the worst?” (He said noone has ever asked this before.)

He answered that one of the best jobs he had was working as a graphics designer. While working on manuals for the US Army, he was the ‘hand guy’. He was called ‘hand guy’ because other people would do all those complicated technical drawings, but they couldn’t draw hands. When the drawings were finished, they would hand them over to him so he could draw the hand that did something. He even occasionally got to drawing a head as well.

“In the US Army, the manuals are written for fifth graders (they always told us to keep it simple), so I thought: If some fifth graders broke into an Army base, they’d be flyin’ those helicopters in no time!”

The thing I enjoyed most that evening, however, was the story about his cat that loved to climb up trees and stay up there for days, and how he once tried to make it come down by sitting on the roof in the middle of a storm with 60-miles-per-hour wind… but I really can’t retell it, you have to see and hear him tell it. I laughed so hard, I was barely able to breathe…

Everything in “Â ” is a quote (or rather, a near-quote as well as I can remeber it an hour after coming home) of Tad.

He also named a few of his favourite writers: Michael Morcock (whom he also knows personally), Steven Brust, Ian Bards, and some others whose names I don’t remember.

Asked about his next works after Otherland IV, which is going to be released in March or April 2001, he said he has actually signed contracts for two single-volume books. The first is going to be called “War of the Flowers”, and the second is going to be a collection of short stories that take place in Osten Ard. The frame story will take place about 500 years later than the Memory, Sorrow and Thorn trilogy, and the new idea about the whole thing is that Osten Ard will have reached the industrial age, maybe like the early 19th century in reality. The stories will be from other, earlier times, maybe some of them will even be before ‘Memory, Sorrow and Thorn’.

After he had answered questions for about two hours, lots of people wanted their books signed by him. 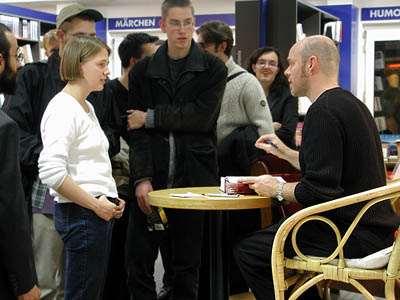 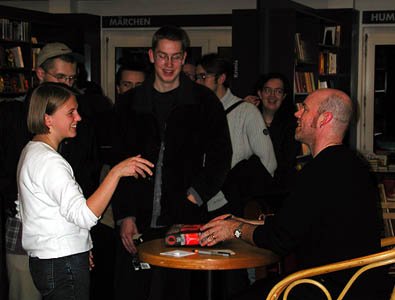