André and I started on our journey at half past nine and arrived in Amsterdam at 2 pm. We took the sneltram line 51 to our hotel and checked in. Then André went to the conference in the RAI, which was within walking distance of our hotel. I went back into the city and went for a walk. 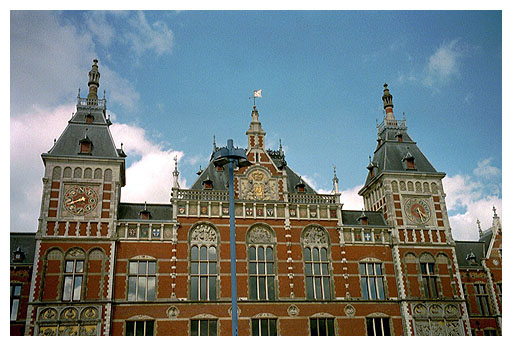 From the centraal station, I walked down the Damrak past the Beurs van Berlage, the first stock market, to the Dam. Then I continued on the Kalverstraat, the shopping street in the Netherlands. Well, at least my guidebook said so. These places were all quite crowded with tourists, and I was happy to leave most of them behind as I continued.

I had a brief look at the Munttoren, a tower of the medieval town wall, and some flower shops with lots of tulips. Then I went on to the Spui and the Begijnhof. The latter is a small courtyard surrounded by typical Amsterdam houses, a very secluded place. Unfortunately, it was already closed to the public, so I couldn’t go inside. (Of course it is understandable that the people who live there don’t want tourists to run around in front of their houses all day long and let them only come inside between 10 am and 5 pm. Groups and guided tours are not allowed at all.)

Afterwards, I got something for dinner and went back to the hotel. I spent the evening reading the guidebook and setting up a plan for the next three days.

We got up at seven, I think, and had a wonderful breakfast before going to the WWW9 conference or leaving for the city center. Our hotel had a huge breakfast buffet with scrambled or boiled eggs, ham, sausage links, Rösti (similar to hash browns), different kinds of cereal, joghurt, quark cheese, fresh fruit salad, fresh fruit juices, different rolls, bread, muffins… yummy! 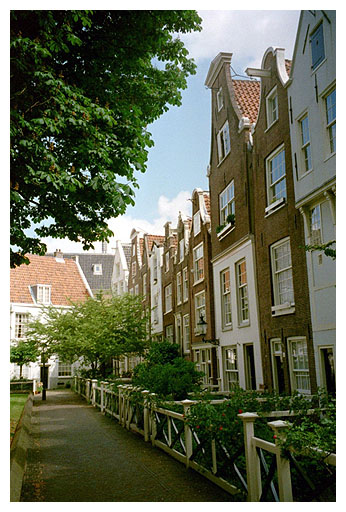 First of all, I went to the Begijnhof once more. This time, I was able to actually see it from the inside. There was no one except me when I came, and I took my time and had a look around. The houses in Amsterdam are mostly built from dark red-brown bricks, with large white windows and doors painted in different colors. They face the street with the gabel and usually are pretty narrow and stretch perpendicular to the street. The houses, some of which are more than 400 years old, were built that way because the owners had to pay taxes according to their street-facing width. Thus, it was cheaper to build a long, narrow house than, say, a square one. The narrowest house on the Begijnhof was only 1.45 m (5 ft) wide! I had a look at the doorbells: there were supposedly three separate apartments in the house, maybe one on each floor. I would have liked to see that house from the inside!

My next stop was the Anne Frank Huis, which is in the Jordaan quarter. To get there, I had to cross almost all the Grachten: the Singel, the Herengracht, and the Keizersgracht. The Anne Frank Huis is at Prinsengracht, the outermost Gracht. The three Grachten and the Singel are parallel to each other and form almost a circle around the inner city. Gracht, by the way, is the Dutch word for “channel”.

Amsterdam with the Grachten

The Anne Frank museum consists of two old houses and a new building that houses part of the exhibition. The modern part is next to the Westerkerk (“western church”), while the house where the Frank family hid is the furthest from the kerk.

Outside the building, there were about fifty people waiting in line in order to visit the museum, but it took only 20 minutes or so to get inside.

The museum was very interesting to visit. I read Anne Frank’s diary more than once and remembered it vividly, but actually seeing the house and the rooms in which the Frank and van Daan families and Mr. Pfeffer hid. None of the furniture was left since it was confiscated by the Germans after the eight onderduikers had been deported to concentration camps, but even the empty rooms made it possible to imagine what life had been like for eight people in four tiny rooms during the two years plus they hid. To emphasize the atmosphere, the windows were covered with the same kind of curtains that were used during WWII in order to hide the inhabitants from the outside. Because of these curtains, it was always dim inside, and on a cloudy day (like it was when I was there), it was barely bright enough to read. 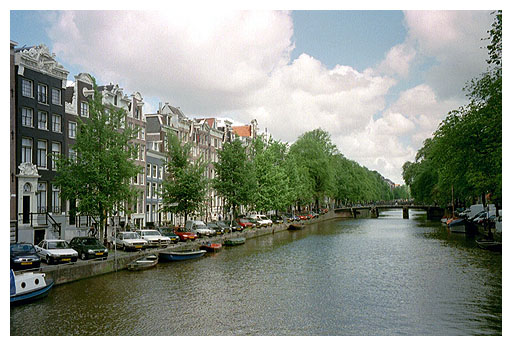 I spend the rest of the afternoon walking around in the Jordaan quarter, which consists of cute little old houses and smaller Grachten perpendicular to the ones I mentioned earlier. The Dutch seem to be very fond of flowers and plants because virtually every house has pots of them next to the doors, in front of the windows, and even on the sidewalk! The Jordaan quarter is a very nice place to live, I imagine.

Later in the afternoon, when my feet began to hurt from walking around too much, I went to the centraal station and boarded the circle tram. This is a tram line that connects all the sights in Amsterdam and goes round and round all day. Since I had bought a five-day-ticket for the trams the previous day, this was a cheap way to go on a sightseeing tour.

In the evening, a dozen Scripting News readers from the conference met with Dave and had dinner. André took me along so Dave and I could meet. Although I was the only participant who was not male, not in the computer business and not attending the conference, I enjoyed the evening. After dinner at a Chinese restaurant, we went on to a pub, and we returned to our hotel rather late…

Since it was pretty clouded, I decided to visit some museums. First, I went to the Museumplein, which lies in the middle of the Rijksmuseum, the van Gogh Museum, and the Stedelijk Museum. I went to the van Gogh Museum first. Besides housing the largest collection of van Gogh’s paintings, it also has paintings from other artists that lived at the same time as van Gogh or by which his art had been influenced. The museum’s website has lots and lots of information, so I’m not going into details here.

In the afternoon, I went to the Stedelijk Museum. It is, says their website, one of the most important museums of contemporary art in Europe, but I didn’t like it very much. If your time is limited in Amsterdam, you may well leave it out and visit the Rijksmuseum and the van Gogh Museum instead.

From the Stedelijk Museum, I went to the Vondelpark, the city’s largest park. In the seventies, this was where the European hippies who couldn’t afford the trip to San Francisco went. When I was there, the sun came out for a while, so I sat down on a bank and relaxed for a while before returning to the hotel.

Today was the Rijksmuseum‘s day! I arrived at about 9:30 am, half an hour before the museum opened, but there were maybe thirty or fourty people already waiting to get in.

This year, the museum celebrates its 200th anniversary with an exhibition called The Golden Age, featuring paintings from the 17th century. Among the 200 artworks was Rembrandt’s Nightwatch, the most famous painting in the museum.

When I left the Rijksmuseum four hours later at 2 pm, I decided I needed some contrast to so much art and history (it has a large exhibit on Dutch history as well), so I took the tram to the Hortus Botanicus, the botanic garden. It features several thousands of plants from all over the world and has a large greenhouse consisting of three parts with different climates and a separate palm greenhouse. I enjoyed it a great deal, especially because it was not crowded with tourists, and I can recommend to visit it.

Our last day in Amsterdam! The conference was over, so André and I were able to spend some time exploring the city together. After breakfast, we deposited our baggage at the centraal station. In front of the station, I had seen the “internet pillar” a few days earlier, and of course I had to try it out…

It looked just like a public phone, but had a LC display and a metal keyboard instead of a receiver. How cool! Have you ever updated your weblog from a public phone?

Then I showed André the Begijnhof and the Vondelpark. Later, we strolled through the Jordaan together before eating a belated lunch (or an early dinner) at the Brasserie which belongs to the Crowne Plaza Hotel. Then we had to return to the centraal station because our trains left around 5 pm. André went back home to Bonn, while I took a train to my parents in order to go to my cousin’s Konfirmation the next day. 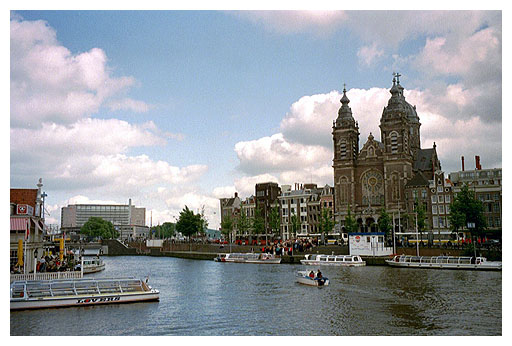 Near the Centraal Station

Despite the weather I had a wonderful time in Amsterdam, and I hope we’ll be able to visit the city again some day. There’s much left for André to see – and for me too, I guess. Tot ziens!

All small photos without white frames were taken from The Amsterdam Heritage site, which has lots of information about the buildings, houses and bridges in Amsterdam, illustrated by many photos. Take a look! It’s well worth it.

The larger photos with white frames were taken by me.