We woke up at 6:30 am this morning, probably because it was pretty cold in our tent… We had breakfast at the restaurant of Curry Village, but it was not very good.

We went to Glacier Point today. Glacier Point is above Yosemite Valley and offers a great view of the valley and the rest of the park. Also, the firefall used to be pushed down from here before 1968, when it was forbidden because it distracted from and posed danger to the nature in Yosemite.

From Glacier Point, we saw Camp Curry with its swimming pool and the Ahwahnee Hotel in the valley and of course prominent rocks like Half Dome or waterfalls, for example Nevada Falls and Vernal Falls.

We stayed there for quite a long time and had ice-cream for lunch. Early in the afternoon, we went back down, but stopped again at a parking lot a little way down from Glacier Point. From there, trails led to Taft Point and to Sentinel Dome. We took the trail to Taft Point, and it took us about 40 minutes to reach the “Fissures”. It lead mostly through forest, and the sun was shining between the trees.

At the fissures, there was a fenced-in viewpoint. But although there was this rail, it felt strange to look straight down hundreds of feet into the valley. On the opposite side, a little to the left of us, was El Capitan with its beautiful cliff. Unbelievable that climbers can get up this smooth wall. 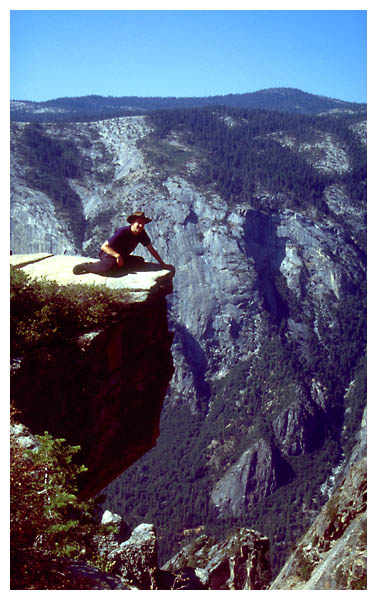 André dared to get very close to the edge. Under his rock, there was nothing – and note the dark line on the rock where it is going to break off any minute…

On the way back to the valley, we stopped at the Tunnel View just behind the tunnel. From there, you look into the valley lengthwise and can see El Capitan, Half Dome and all the other mountains at once. Here’s a picture of El Cap that was taken from inside the valley (actually yesterday). 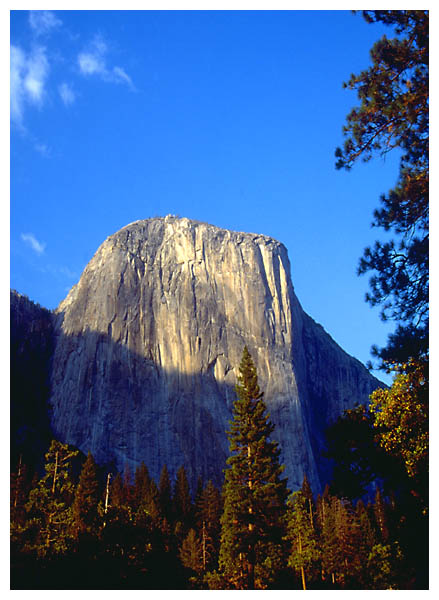 We were in time for a nature walk that started from the Ahwahnee Hotel at 5 pm and learned about the trees that are found around the hotel: ponderosa pine, sequoia, black oak, live oak, apple trees…

While our group stood right in the middle of the back yard of the hotel, looking at some tree or other, several young mule deer appeared. They grazed and practiced fighting and didn’t mind at all that we stared at them and took photos.

Having learned from the day before, we went to have dinner earlier and had pasta in a restaurant near the Visitor Center. Then we had a look at an authentic, but of course not original, indian village next to the Visitor Center. There was a self-guided trail that explained about the South Miwok Indians that lived in the area. Their largest village was called Ahwahnee, for which the luxurious hotel in the valley was named. Quite a contrast between the simplicity of the indian village and the pompous hotel! At least, the hotel has been built entirely from material found in Yosemite Valley, granite and wood.

Then we went to the LeConte Memorial Building. At 8 pm, a certain Mr. Pierce presented a slide-show called “Climbing the summits of the High Sierra”. He spoke about photography a bit, then showed slides he had taken on several hikes through the High Sierra.

The show was over at nine, and we spent some time outside Camp Curry because André wanted to take some pictures of the moon-lit scenery. But I didn’t feel secure in the valley because a ranger had told us there were about 20 bears in the valley itself, and I most definitely didn’t want to meet any of them in the dark.

We went to Tunnel View once more. The valley looked very peaceful in the moonlight, and we also could see some climbers on the face of El Capitan. They had started to climb in the morning, now spent the night hanging in mid-air and planned to reach the top the next day. On the parking lot were some other visitors, among them a woman who made signs for the climbers at El Cap with her flashlight.