We got up at 7:30 am because we wanted to climb Angel’s Landing, but not during the hottest part of the day. We had a huge breakfast (eggs, bacon, pancakes) before entering the park. But before we could start, we had to buy some water and a hat for me. Then we went to the Grotto Picnic Area by car and tried to find a place to park the car. But even after several rounds we had no luck, so we had to drive back to the parking lot of Zion Lodge and walk from there. 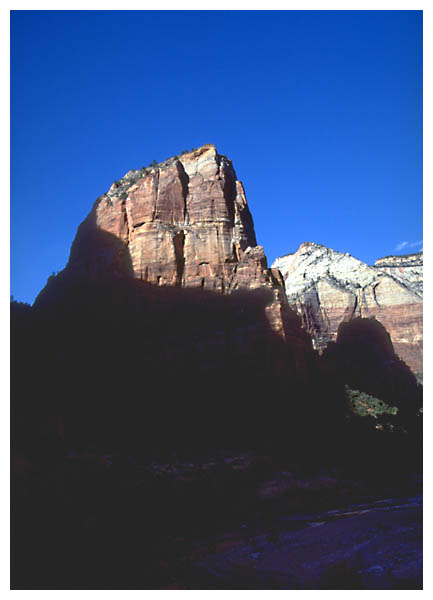 Here’s a picture of Angel’s Landing. We actually took it after we came back down (that’s why the sun is so low and the shadows are so long already), but now you know what I’m talking about here. The picture was taken from the river in the valley, and the topmost spot is where we’re going. It takes about four hours to hike up and back down, said the leaflet we got in the park. The peak has an altitude of 5990 ft or 1765 m.

When we finally reached the trailhead, it was almost noon. And it was getting hot! While we were working hard to get on top of this mountain, others were just bathing in the sun… 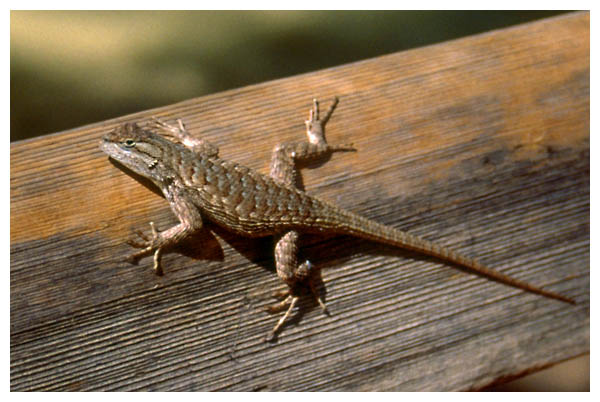 The trail ascended slowly at the beginning, following the course of the Virgin River, but it got much steeper after a while. We stopped for a while before entering Refrigerator Canyon at a spot where a cooling breeze is provided by the wind that blows through the canyon. Feels like air conditioning!

Hiking trough Refrigerator Canyon was a a nice relieve from the heat outside, but soon the canyon ended and we got back into the sun. The next part of the trail was called “Walter’s Wiggles”. I don’t know who this Walter was, but as to the wiggles: 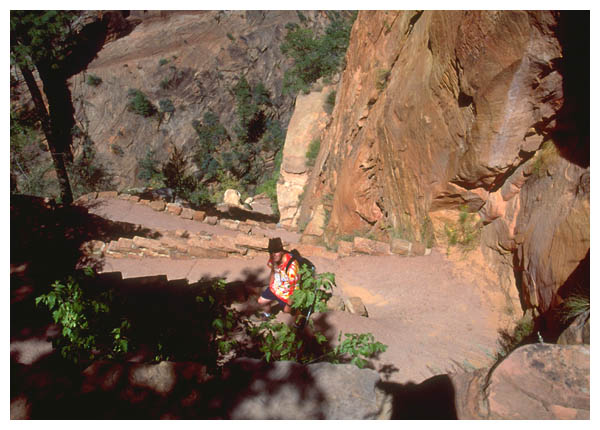 After this straining part of the hike, we stopped for another break and sat down on some rocks beside the trail to rest for a while. Suddenly a snake appeared on the opposite side of the path, right in front of us. It was about three feet long, black with yellow stripes along his back. Andrés first thought was, “Is it poisonuous?”, but I automatically thought, “Where’s the camera? Nobody will believe us we saw a snake if we don’t get a photo of it!”

But at that moment André had already jumped up and grabbed the backpack, and the snake realized that it was facing two humans and disappeared into the bushes next to the rock where we were sitting.

We went on for a little longer, than reached a small platform where many people were resting and sunbathing. I thought we had already made it to the top because the path seemed to end there, but it was only a trick: The path led down a little bit before rising again. Did I say “path”? There was no real path any more: You had to climb over bare rocks, pretty steep and pretty narrow. On both sides, the cliffs went straight down for almost 2000 ft (500m) – this was no hike for people afraid of heights! 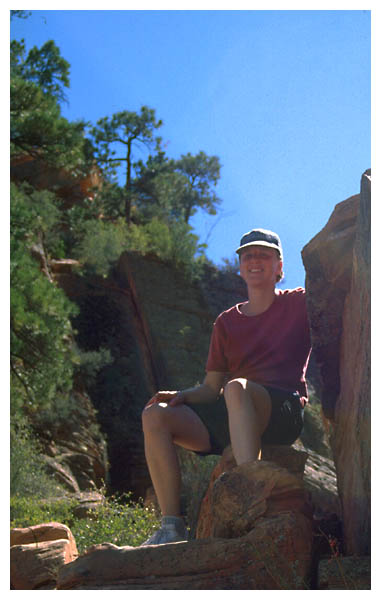 Here I am sitting on the little platform, quite exhausted already. Fortunately, I adapted to the heat much better than I had in Death Valley and was able to go on up to the very top. 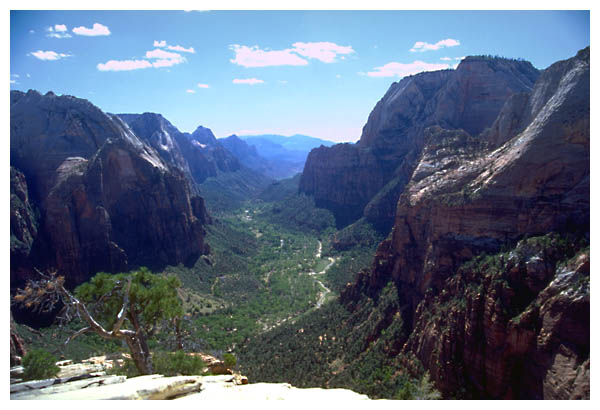 We’ve reached Angel’s Landing, thus named because it is a narrow ridge atop a high mountain with only one strenuous path leading to it. I wonder how the people managed who had built the path and fastened the chains at the steep parts. What a beautiful view! It was definitely worth the effort, and it felt great to have reached the summit.

We stayed for over an hour and then went back down, stopping at the same places we had on the way up. Getting down is definitely less exhausting than climbing up – except for the very steep part directly below the summit. You had to be careful where to put your feet.

We were back at the lodge at 5:30 pm and went to the hotel to take a shower and wash the sweat off before returning to the park for two more talks about endangered species and about the riddles of Zion that have not been solved yet. For example, why is checkerboard mesa looking the way it is? What created the horizontal and vertical lines on the rocks? Nobody knows for sure although a lot of research and thinking has been done.

We described the snake we had seen to one of the rangers, and he guessed it was either a Southwestern Racer (?) or a something-or-other viper. In any case, the snake is not poisonous and harmless to humans.

Afterwards, we went to the “Zion Pizza and Noodles Company” in Springdale for dinner and then went straight to bed, completely exhausted. Tomorrow we’re going all the way to Yosemite National Park!