After breakfast Jennifer and Jason took us to a parking lot a few miles south of Hesperia (yet another neighbor town of Apple Valley), where we met Jason’s Cousin Jeff and his wife Heather. They had brought their daughter, so little Jay had company, too. 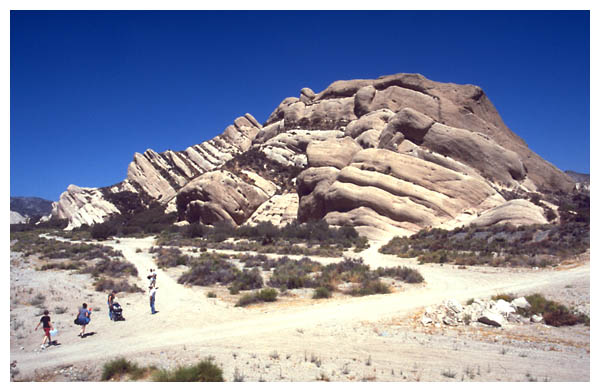 Together, we went to the “Mormon Rocks” and found a shadowy place beneath a tree. It was awfully hot although it was only ten or eleven in the morning.

Jeff, Jason and André climbed the rocks together, and Jeff fastened a 165 ft long rope to some nails that were already fixed at the top of the rocks. Jeff put on one of the harnesses he had brought, slung the rope through a metal eight that was fastened to the front of the harness and went down first to test if it was safe.

Then Jason helped André to put on the other harness and explained how to control the speed. You have to hold the rope with your right hand. If you want to brake, you hold your hand close to your body to increase the friction on the rope so you go down more slowly. If you want to go faster, you stretch out your arm to the side so the rope has less friction. It’s very easy to do and not risky at all because if you lose control, the person who holds on to the end of the rope can pull it straight and you are stopped because the friction is increased. By this, you can be let down slowly and carefully.

But of course, there was no need for this because André wasn’t afraid at all and didn’t faint on his was down… 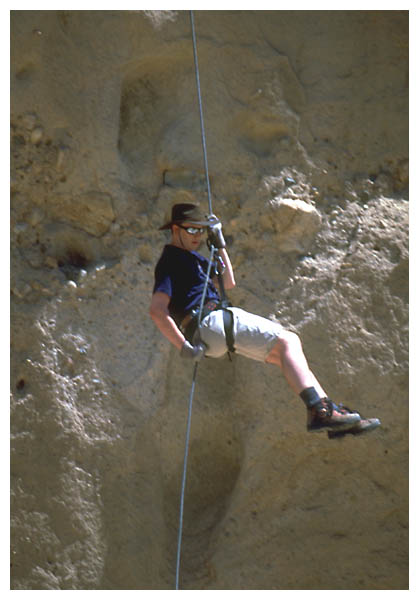 In fact, he seemed to enjoy himself a great deal! 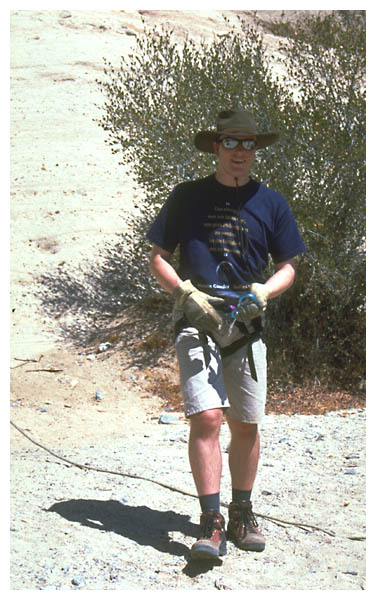 When André was back down, Jason went next, and Jeff and I climbed up. This was not so easy for me since I had shorter legs than the men, but I managed with a little help from Jeff. He also helped me put on a harness and explained how to control my speed – and down I went! At first, I couldn’t move downwards because I was too light and had to decrease the friction as much as possible. But when I had left the curving part of the top rock and was hanging in mid-air, it worked just fine. 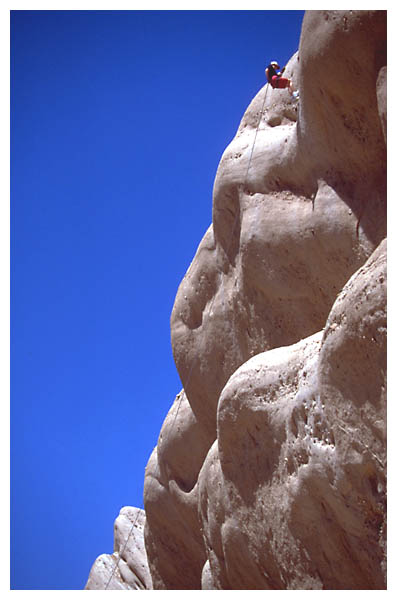 After that, Jennifer and Heather went up as well, and then some of us went up another time. Only the children had to stay on the ground, but it seemed they were enjoying themselves nevertheless.

When we were all tired and couldn’t stand the heat anymore, we went home to take a shower before going to the barbeque. We spent the afternoon with Jason’s parents and other family members at the home of his grandparents and had delicious hamburgers for dinner. In the evening we went to Hesperia once more to visit Jennifer’s parents who were my hosts in 1992, but they had not yet returned from their day trip.